Websites That Do Not Give Free Bitcoins (III)

Yes, after issues one and two, it's time for another round of websites that do not give free bitcoins. Maybe they once gave but now don't. Or perhaps they were a scam from the beginning. Either way, here are my last findings. If you see these sites linked, don't lose your time: ignore them!

Don't let these sites fool you!

As you may already know if you've been following this blog for some time, GOXKEYGEN gave you codes that you could redeem at Mt.Gox for a handful of microbitcoins. Now it redirects you to a different web through a referral link. An original idea died.

There are some sites that play a fundamental role in increasing the number of Bitcoin users. CoinTube was one of them. There you could get your first free bitcoins for watching videos. We will all remember the first time that, after tedious hours waiting for our freshly-installed Bitcoin client to synchronize with the network, we watched a video at this place and suddenly some microbitcoins made their way to our digital wallet. It felt almost like magic! This won't happen anymore, since CoinTube has decided to stop paying their users. They still make money through Virool if you visit them and watch the videos they show you, but they won't pay you back in Bitcoins part of their earnings. It's a pity. 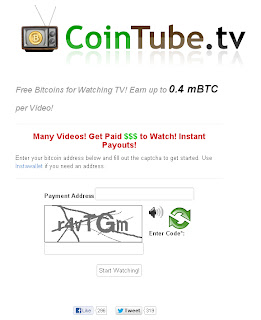 This place used to give some free bitcoins every day, so it was like a bitcoin faucet you could use each 24 hours. Now it doesn't exist. Somebody took the domain oscry.com and at the moment it only shows ads. I managed to find a very low-quality image of what it looked like in the past: 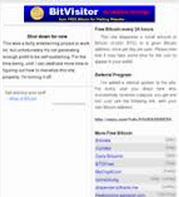 Hm... All I can see is that it advertised BitVisitor!

Here you had some virtual scratchcards which gave you free bitcoins after, well, scratching them... Now they say they'll be back soon. One month ago TenDrawBTC said the same. I wonder what "soon" means to all these people who take down their site to redesign it!

I'll also return to your site to review it... Soon! Really, really soon!

This is a web where you can advertise yourself and earn bitcoins by playing some kind of game, but we don't care about that. We care about the faucet at the bottom of the page. A faucet that doesn't work. At all. And it looks like a clone of the NetLookup faucet... Designed to trick us into spreading the word about BitStart. Meh!

You may input anything, because it doesn't even check whether
it is a real bitcoin address what you write...

Do you know of any other website that gives bitcoins for free? Tell us on the comments!
Publicado por The Bitcoin Master en 11:41 AM