This is a site that I found just yesterday, lurking around the Bitcoin Reddit (which you should visit from time to time). It's very similar to BTC For Me (reviewed here): you send a tweet and receive free bitcoins. Let's see the details of BitSprinkle: 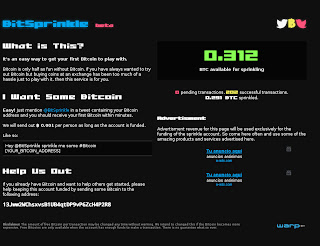 Do you know of any other website that gives bitcoins for free? Tell us on the comments!
Publicado por The Bitcoin Master en 12:35 PM