If you have ever mined bitcoins, it's very likely certain that you used either your CPU or your GPU. GPUs have a hashing power (mining speed) about a hundred times that of CPUs. "Serious" miners nowadays use their GPU to mine for this reason. "CPU mining is extremely slow and doesn't deserve your time", they'll tell you if you raise the possibility. But now a new kind of hardware is challenging the hashing speeds of the best graphic cards: Application Specific Integrated Circuits (ASICs) designed exclusively with one goal in mind: mining bitcoins as fast as possible! 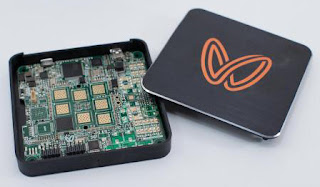 An ASIC from Butterfly Labs

GPUs might have been a good choice to mine during the first years of Bitcoin, but none of them were optimized for this task. ASICs will. And now "serious" miners will say about GPUs the same they said about CPUs: that now that there are ASICs around with hashing speeds a hundred times that of GPUs, these are a joke. They are not efficient anymore.

I don't think however that previous GPU miners not willing to purchase ASICs will stop mining. Once you get into alternative currencies and learn about cryptocurrencies you usually get sucked in and it's not that difficult to forget about everything just because an event like this happens. I believe that now we are going to see more people mining other cryptocurrencies based on Bitcoin such as Litecoins or Terracoins.

I've become interested on these other cryptocurrencies lately. When I jumped into the world of Bitcoin and learned of their existence I thought they were unnecessary. The Bitcoin wiki says about Litecoins:


Litecoin cannot be "silver to bitcoin's gold", because Bitcoin itself is both gold and silver:
While in the long-run, the BTC unit may be too valuable for everyday trade ("gold"),
there are other, much smaller units that can just as well serve the purpose of "silver"
while being naturally/automatically "converted" to/from BTC.

That seemed about right for me. Furthermore, the only feature Litecoins had that made them different from Bitcoins was that the confirmations were faster. But now ASICs have added an important difference to the equation: Litecoins are far easier to mine. And they are increasing their value. For each 10 megahashes/second of power you have, you can get approximately a full Litecoin per day or 1 milliBitcoin in 24 hours. That's $0.18 versus $0.14 at current exchange rates.

The alternative cryptocurrencies didn't seem to have any future with Bitcoin being adopted by more and more businesses lately, but several events happening during the last days might change their fate. I'll keep an eye on them.

Do you know of any other website that gives bitcoins for free? Tell us on the comments!
Publicado por The Bitcoin Master en 7:34 PM