Hi! This is Marcus Wilson, The Bitcoin Master's butler! I'm not as good as him reviewing stuff, but I'll make my best every last day of each month to cast an eye on what he had to say about the world of Bitcoin. Let's see what we have for February 2013, the very first month he decided to share his wisdom with the rest of us mortals... 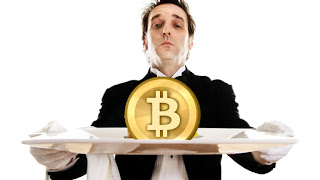 But first, let me serve dinner to The Master...

During the month of February 2013, The Bitcoin Master wrote:


Wow, it's been a pretty intense month for The Bitcoin Master! This month he focused his energies on telling us which the best websites to get free bitcoins are, how they work and what we should do to maximize our rewards on them. He also warned us about several websites that don't give out free bitcoins although there are many links pointing to them. He informed us on the steps one must take to get into bitcoin, how to join a mining pool and how to join a market exchange. He gambled money for the first time on his life just for the sake of documenting how a popular bitcoin gambling game works. He even unmasked a scammer stealing coins to unvigilant bitcoiners.

On the first day of the month only 3 people read what he had to say (and two of them were me). Today he is read by over 500 people each day. During this month, 10.000 people have come to this place to read his articles and learn from him. He's achieved all of this in one month, starting from zero.

The Bitcoin Master is simply amazing. I love being his butler.

Do you know of any other website that gives bitcoins for free? Tell us on the comments!
Publicado por The Bitcoin Master en 10:47 AM

Email ThisBlogThis!Share to TwitterShare to FacebookShare to Pinterest
Etiquetas: 2013, February, Month in Review